Follow Us on:
Introducing the Workforce of the Future to the Supply Chain Industry
Date Posted: 06.22.22

Perhaps you’ve heard there’s a talent shortage at all levels of the supply chain. Everyone in our industry — from vendors, suppliers, manufacturers, and system integrators to shippers, distributors, wholesalers, retailers, and other practitioners — is looking for great people to add to their teams.

It’s an issue the industry has been grappling with for a while. It’s also an issue that became even more acute over the past couple of pandemic-impacted years. One solution has been to increase efforts to introduce the industry to younger generations. Not just students at the university and college level, but also at high school and — in some cases — even younger.

Although everyone in the world now understands what a supply chain is thanks to the product shortages on retailer’s shelves and online storefronts, it’s typically not a public-facing industry. The average person doesn’t walk into a warehouse or distribution center the way they walk into a bank or a grocery store or an automotive repair shop. The technologies and solutions that make supply chains work are hidden from view for most of us.

Nearly two decades ago, MHI, the supply chain and materials handling industry association that sponsors MODEX and ProMat, recognized the importance of giving students face time with the equipment, technologies, and vendors. It hosts Student Days at both shows, inviting hundreds of students from high schools, universities, and community colleges to attend the event. While there, the students hear presentations from industry professionals, as well as take tours of the show floor. The goal is to pique their interest in the industry and hopefully attract them to explore careers in the field.

So, when MODEX 2022 overlapped with my kids’ spring break week, our family scrapped our previous vacation plans for a stint in Atlanta. While I worked the show floor, my wife and kids took in the sights. Except for Wednesday, when my son Nicholas and I engaged in our own version of “Take Your Kid To Work Day: Tradeshow Edition.”

At 16, he was finally old enough to be admitted onto the show floor. Unlike most children, Nicholas has grown up with a father who works in the supply chain field. He’s also always been interested in what I do for a living. Admittedly, I might have deliberately planted the seed by taking him to the technology demo room at my previous employer, where we fired up all the conveyors, sorters, and other automated solutions for him to see at a very young age. (His reaction? “Dad! When I grow up, I want to be a product manager!” I gently encouraged him to aim higher.)

Despite his interest, I was still a little apprehensive about taking Nicholas to the show. How would he react? Would he be the only 16-year-old on the floor? Would I be the only Dad touring the event with my kid?

But he seemed genuinely excited — as excited as a teenager lets on to his parents, that is — about it. MODEX was not only his first chance to see a much bigger range of material handling equipment and technologies than he’d seen before, but also it was the first ever tradeshow or exposition of any kind he had ever attended.

Still, I arranged our schedule so Nicholas and I would cruise the MODEX show floor on Wednesday, which is when MHI’s Student Days spends a lot of time touring exhibits. That ensured we wouldn’t stand out, and I figured exhibitors might be more willing to chat with my son if they were already chatting with other students throughout the event as well.

I wanted to make sure he had the full tradeshow experience, so we started our morning by registering him onsite and picking up his badge and lanyard. Then we stopped for a quick photo at the MODEX sign before taking the escalator down through the main entrance. I really enjoyed seeing his reaction to that first impression of the show floor, as well as throughout the three hours we spent walking through it.

Nicholas was super engaged from the outset, asking lots of questions both of me and of the vendors whose booths we stopped in at. He held his own talking with exhibitors and listening to their explanations of how their technologies worked. In addition to being curious, he was also very observant. For example, after seeing robotic arms in several booths, he started pointing out the differences in end effectors and asking me to explain why that was.

While he was certainly drawn to the robotics exhibits, Nicholas also wanted to learn more about virtually everything we saw. From casters, racking, and pallets to motor-driven roller (MDR) conveyor, sortation systems, and pop-up diverts, he asked about how it all worked together, why one solution might be used over another, and where within a facility and handling process the equipment is deployed.

For me, the opportunity to see MODEX through my son’s eyes was an energizing experience. Obviously, I was proud of how he conducted himself in a professional venue. But watching his reactions to and answering his questions about the equipment connected me back to the awe and wonder I have for the industry and its technologies. As someone who has seen transportation conveyor in virtually every configuration there is, for example, explaining its role to my son helped renewed my own enthusiasm for technologies I’ve come to take for granted after more than 20 years in the field.

What’s next for Nicholas?

While at the show, he was encouraged by several companies to stay in touch, as many are rolling out internship programs at the high school level now (in addition to those they offer for post-secondary students). Back at home he’s begun researching the industry and the technologies on his own, thinking about what he might want to pursue as a career.

As a direct result of MODEX, Nicholas changed his elective course for the 2022-2023 school year from orchestra to coding and computer science. He’s also asked to go to ProMat 2023, and — after sharing photos and videos of the technologies he saw on the show floor — three of his friends have asked me if they could come to ProMat too! And, although a new car is still at the top of the list for her 16th birthday, Nicholas’ younger sister has informed me that she also expects a trip to a tradeshow, too.

Assuming the school schedules work, I’ll gladly take my kids to industry tradeshows going forward. I absolutely encourage any parent to do the same. There are so many opportunities in materials handling and supply chain consulting that people are unaware of; it really is a hidden gem profession in which anyone can make a long-term career. And if we’re going to grow the talent pool for our field, it’s important to let the workforce of the future experience our industry now.

Thinking about taking your teen to an upcoming ProMat or MODEX show? I’d be happy to answer any questions you may have that I didn’t cover. Connect with me through DCS. 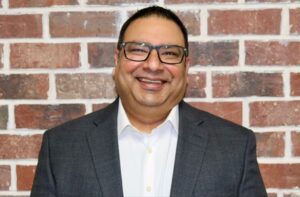 As an SME in material handling, Satyen has an extensive background in creating solutions for the retail/e-comm, Parcel, Post, and baggage handling market verticals. He has worn several hats including Product Management, Applications Engineer, Technical support and most recently as an Account Executive with DCS. Satyen has conducted numerous educational speaking engagements and has sat on committees for MHI.